In Memory of Martha Wallach

In Memory of Martha Wallach

We fondly remember one of our early Women in German members, Martha Kaarsberg Wallach, Professor Emeritus of Modern Languages at Central Connecticut State University, who died a year ago, on February 28, 2017,
at the age of 85. She was a wonderful, outgoing person, with a great sense of humor and curiosity. No surprise that she excelled in hilarious performances as a member oft the WIG cabaret. Her talent as a natural story teller was legendary, and her tales were often very funny, even when speaking of hardships, or tragedy—for instance, the flight of her family from wartime Poland, the death of her husband and her eldest son, her serious illnesses. She saw the world critically but also in a positive light. Her life centered on meaningful activity and purpose. Thus, she completed her Ph.D. while raising three children as a single mother after divorcing her first husband. She became a full professor, as well as Chair of Modern Languagaes at Central Connecticut State University and was honored as the first female recipient with the distinguished Central Connecticut State Professorship in October 1998. Her students meant the world to her. She was deeply involved in research projects, in establishing scholarly exchanges with Germany, and she was active in many professional organizations. As topics for her publications she favoured women’s studies subjects. Even years after retiring from her position at the university she worked on a book that was published in the year 2000. 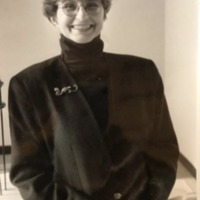