Women in German: Coming forward to retreat. Until now, Women in German has been a thread connecting us in scattered places. Now we will come together, face to face, to strengthen these connections and to make sure that we don’t retreat into academic isolation. There is still time to register for the Women in German weekend retreat, combined with a one-day symposium, to be held at Miami University, Oxford, Ohio, on September 24-26, 1976. Be Sure to register so that Gisela Bahr can take care of food and lodging accommodations; just because you know you’re coming doesn’t mean Gisela knows. There is a registration form for your convenience attached at the end of the newsletter.

Here is a preview of topics to be treated on Feminism and German Studies: Revolutionary Women in Imperial Germany; Two German Women and the American Civil War; a comparison of the work of Hippel and Mary Wollstonecraft; a panel on women’s magazines in West Germany, France and the USA; a comparative analysis of sex bias in USA and GDR children’s readers (with slides); feminist theater in West Germany and the USA.

When you register, be sure to enclose a self-addressed stamped envelope so that programs and driving instructions can be mailed to you. Also bring sleeping bags to the retreat. If you are arriving on Friday afternoon, come directly to the retreat, where we will be having supper together. The Women in German retreat will begin Friday evening and continue on Saturday evening and Sunday morning.
The symposium will take place Saturday.

If anyone from the Chicago area wants a ride to Ohio, leave your name and phone number with Pat Russian’s parents: [redacted] Pat will be driving from Chicago and be coming into the city only a few days before the meeting. Her Providence address is: [redacted]

For those of you who can’t attend, we will write a report of the weekend for the next issue of the newsletter.

A women’s coalition meeting at SAMLA will take place on Friday, November 5, at 4:00 p.m. in Tower Suite 16, Peachtree Center Plaza Hotel, Atlanta, Georgia. Anyone who would like to help or who has suggestions should contact Elke Frederiksen, Department of Germanic and Slavic Languages and Literatures, University of Maryland, College Park, MD. 20742.

The Tenth Amherst Colloquium on German Literature will be held on the campus of the University of Massachusetts at Amherst on Friday and Saturday, April 29 and 30, 1977, possibly beginning with an evening session on April 28. The theme will be "Die Frau in der deutschen Literatur: Autorin - Heldin - Leserin" and papers should address themselves to relevant topics (authors, movements, or individual works) from a feminist perspective. The papers may be given in German or in English, but if they are in English the speaker will be responsible for the German translation to be used in the book publication. Normally there will be two lectures each morning and afternoon of about forty minutes in length. Depending on the topics offered, however, it may be possible to devote one afternoon meeting to one or more simultaneous forum discussions around fixed topics with short papers (10 to 15 minutes each).
People interested in participating should submit their suggestions and a one-page outline by October 1. All communications should be sent to Wolfgang Paulsen, German Department, Herter Hall, University of Massachusetts, Amherst, Mass. 01002

The "Sexism in Textbooks" section was a huge success. It was not only well attended, but extremely exciting as well. The three papers were enthusiastically received by the audience, which included editors of major Germanistik journals and some textbook writers. One of these writers publicly recognized the sexism of his text and announced that he would change the offending passages in the next edition. Basically everyone present agreed that there was a clear need for further re-assessment of textbooks.

There was also a Women in German meeting at the AATG which lasted three hours and was well attended. Plans for sessions at next year's AATG were discussed but not yet finalized. A good deal of interest was evidenced. It became clear that not enough information on who these writers are, is easily accessible. Therefore we repeat our call for syllabi and bibliographies pertaining to German women writers in the original and in translation.

WHAT’S IN A NAME?

In February 1975 we changed our name from Women in Germanistik to Women in German (see issue No. 2). We made this change in order to include as many people as possible. As interest in our perspective has been growing, we have been told that some of our male colleagues feel excluded by our title. This question was debated at the AATG and will be brought up at the Ohio retreat. What is your opinion? Here are the two basic positions:

(1) Women in German sounds as if it were exclusively for, by and about women. However, it is the name by which we are already known.

(2) Any title which includes the word "feminist" (a much-suggested possibility) might exclude people who were interested in women-related issues but were not ready to call themselves feminists.

Also to be considered: Should we keep the name of the coalition (Women in German) and only change the name of the newsletter? One name that has been suggested for the newsletter is German Feminist Perspectives. Those who are planning to come to Ohio should think about these positions and come with concrete suggestions, especially if you are for a name change. If you cannot come to Ohio, we would like to hear your responses to these questions as soon as possible so we can bring them to the retreat.

Some of us have been to Germany over the summer, and realize how much material there is, how difficult it is to get it all together and to keep posted on recent developments in German women’s studies. So if you’ve been to Germany, or have read interesting books, new journals, pamphlets or magazines, or have seen German films pertinent to women’s studies, write down your experiences and share your information with us. Only then can Women in German continue to be a channel for communication.

If you wish to get material from Germany, you can order directly from the two women’s bookshops in West Berlin:

Verena Stefan's Häutungen (Verlag Frauenoffensive, Munchen 1975) is being widely read and has already been translated into French. It's an important feminist text which records the struggles and development of a young woman who is active in the German new left in the 1960s and becomes involved in the women's movement in the 70s. The book is autobiographical and combines memoirs, poems, analysis and introspection, in language that is vigorous, fresh, and consciously feminist. Though it is the story of one woman, it exemplifies the development of many women in West Germany and the USA. The book records the author's growing sense of self and strength. The process is as yet unfinished, but its direction is positive and affirming.

We have decided that each yearly 4-issue subscription will begin in the fall.
If, however, you mailed in your $2.00 last spring, then obviously just wait until next fall to re-subscribe.

If you need back issues of Women in German or if you have changed your address, please notify us, since the newsletter is not forwarded when sent in a bulk mailing. 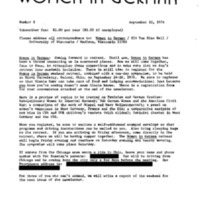