NEWS FROM WOMEN IN GERMAN

In her seminal essay Virginia Woolf asks what a women needs in order to create, to which she answers, "money and a room of her own." Within the News from Women in German we have been creating a space for ourselves in the context of German studies. Recently we have created another kind of space; we need no longer be reached c/o anybody; we now have our own mailbox: Women in German, German Department, University of Wisconsin, Madison, Wise. 53706.

Now that we have a space of our own, we come to the second half of the equation.
Many of you have already inquired about subscription fees. Until now this hasn't been necessary, but as we reach more people and our mailing list continues to expand, we will have to collectively share the expenses. If you wish to continue to receive the newsletter, please send $2 for the academic year 1975/76 (Students and non­-employed may send $1). We expect to produce four issues per year.

While growth has led to greater expense, it has also brought with it increased Involvement among our readers. We are very encouraged with the positive and suppor­tive feedback that you have sent us and with the recognition we have received in othe publications. With regard to feedback, our new column, Dialogue, (see Newsletter 3, p. 2) did not provide the kind of response we had hoped it would. You may remember that we raised some crucial questions concerning Christa Wolf's and Karin Struck’s views of women; very likely the intervening summer vacation had something to do with your lack of response, but we nonetheless would like to get Dialogue going this fall. Our interest in Wolf and Struck may not coincide with yours. Of course this column is open to any other controversial issues you may wish to raise.

We also have another new plan for the newsletter. In this issue we are starting a listing of Research in Progress, a column that will describe work that people are doing. This will help us locate resource people in specific areas and will allow people working on similar projects to contact one another. In this respect we are fortunate, for this year, associated Women in German meetings have been set up for the MLA, MMLA and AATG. For specific details concerning these meetings see the Announcement column in this issue.

Face to Face: A Weekend Conference of Women in German?

For well over a year now we have been receiving queries about the possibility of a weekend meeting of women in German. Although we will be getting together at the MLA AATG and MMLA, these brief business sessions cannot possibly replace a weekend of it depth seminars, discussion and workshops on topics of immediate interest to us. Th on the one hand, it seems clear that a two or three day conference would be a stimu­lating and valuable learning experience; on the other, it is equally clear that suet a meeting would take a good deal of advance planning and organization. In the past, whenever this topic was brought up in informal conversations, there was always dis­cussion about which part of the country would be best, when would be the best time, how much would it cost, etc. We believe that if we are really ever to have such a conference, the time has come to go beyond such abstract questioning. It is our feeling that if anyone (or any group of people) feels ready to organize a conference of women in German, she (or they) should simply step forward and, in consultation w.

as many others of us as possible, make whatever arrangement seems to make the most sense. We should take care to keep the venture as cheap as possible or no one would be able to attend. Obviously all of us would be willing to share in the planning and serve as contact/resource people, but someone(s) must take the initiative. Therefore, we suggest that anyone seriously interested write to the newsletter and we will put people in contact with each other and will also publish any ideas that are sent in. This topic will also be raised at all the business meetings Of our group. What do you think of the idea of a workshop weekend? Would YOU be willing to organize It? Send feedback and concrete suggestions as soon as possible. Meeting face to face is an exciting idea that probably should not be delayed much longer.

There will be a Coalition Of Women in German meeting at the 7th annual MMLA conference in Chicago (November 6-8, Palmer House). The Women in German meet at 1:30-3:30 on November 7 in Parlor A.
Chairperson: Patricia A. Herminghouse
The Topics are: Evaluation and Discussion of the. Newsletter The Sexism in Textbooks Project Other New Projects
The Possibility of a Spring Meeting (see page 1 of this newsletter)

An Organizational meeting of Women in German will take place in Washington during the 43rd annual AATG meeting (November 27-30, in the Washington Hilton). r This meeting will be on November-29 at 4:30-5:30 in the Farragut Suites.

A third meeting of Women in German is planned for the MLA convention this year In Sar Francisco (December, 1975). At this time we haven’t received notice of its location of date, so look for details in your official program.

At the same conference there will be a seminar on how to teach "Btirgerllches Trauer— spiel," from a feminist perspective focusing specifically on Marla Magdalene and

Kabale und Liebe. The discussants will be Naomi Stephan (Valparaiso), Barbara Drygulski Wright (University of Connecticut) and Judy Harris (Berkeley), and the sem­inar will be coordinated by Pat Russian (Brown) and Pat Herminghouse (Washington University). According to the two Pats, the session looks very exciting.

1) We are glad to announce that Unterrichtspraxis is devoting its entire spring issue to the theme of women in German. Now’s the time to put the finishing touches on that article or to sit down and review that new book you’ve been mulling over. We all have expertise, and there’s never a better time than now to share it.

2) We’d like to remind all of you that if you move and wish to continue receiving NEWS from Women in German, we need to know your new address. Contact us soon so that we can update our files.

A Slide-Tape presentation, Sexism in Foreign Language Textbooks (27 min.), prepared by Rhoda Stern, CUNY, documents and analyzes sexist content and photographs in recent textbooks by 16 publishers. The show is available for rental ($35) and sale ($300) from WOWI, Women on Words and Images, [redacted] . Ms. Sterr cites examples of under-representation of girls and women as well as sex-role stereo­typing in textbook dialogues and stories.

German language texts discussed on the tape are:

An attempt was made by a collective of graduate students in the Department of German at the University of Wisconsin to create an Introductory cultural reader for the first semester of German. The Madison Collective had three goals in mind:

1. to develop reading proficiency in German at the beginning level,
2. to aid students in developing a critical perspective on the modern German states and German history, and
3. to introduce materialistic concepts, such as class, which students could apply to their own situation in the United States.
The collective made every effort to avoid sexism and to unmask it in society.

With these goals in mind, the collective attempted to break down stereotyped views by taking a closer look at what is often accepted as German culture. The two German states are equally treated and are seen from a critical perspective.

This text is currently being used in Madison on an experimental basis in first semest German. There will be a discussion of this Cultural Reader at the MMLA meeting in Chicago, Palmer House, on Saturday, November 8, at 8:30-10:00 in the Forum on Marxism and Literary Studies in the Crystal Room.

Examples of the text (photo-offset, paperbackbound) will be available at the meeting; limited numbers of copies are also available through Madison Collective, c/o Christa Stutius, Dept. of German, University of Wisconsin, Madison, WI 53706. We ate par­ticularly interested in receiving a feminist response to our effort. Interested people are invited to criticize this text on the evaluation forms accompanying it.

"Alternative Theatre and Politics in the 1960*8 and 1970*s:' A Feminist Perspective" is the subject of a joint paper being prepared by Evelyn Torton Beck, Betsy Edelson and Nancy Vedder-Shults. The paper will be a comparative study of feminist theatre in this country and in West Germany within the context of radical theatre in the past two decades. It will be presented on November 21 at the Wisconsin Workshop, the focus of which this year will be "History and Drama in Germany."

Most of the information about feminist theatre has and is being gathered by a ques­tionnaire distributed to anyone working in or familiar with women’s theatre groups. Evelyn, Betsy and Nancy are interested in sending out these questionnaires to anyone who would have information on such activity. Please contact them at the University of Wisconsin-Madison, German Dept. as soon as possible if you are interested in a questionnaire or have any other material on feminist theatre, especially in West Germany.

Women and Children in the GDR

During a visit to the GDR in the summer of 1975, Donna Slepack researched day care facilities there, comparing them to centers in the FRG. In a brief article she describes the comparative advances day care has made in the GDR and .appends useful, very recent statistical data on day care attendance and women’s labor force partici­pation in both Germanies.

Donna also has a report on a conversation with one of the leading GDR writers of children’s literature regarding the role of the writer in removing patriarchal atti­tudes, a description of a children's literature conference and various materials on the role of women in the GDR.

Enclosed, please find my $2 ($1) for a years subscription to Women in German. Send your check to: Women in German, German Department, University of Wisconsin, Madison, Wisconsin 53706. 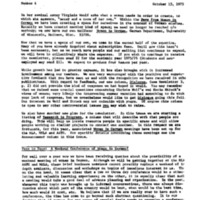